SHU-HA-RI  is basically a model . As you learn something, you go through a progression of learning and there’s three stages from this model. 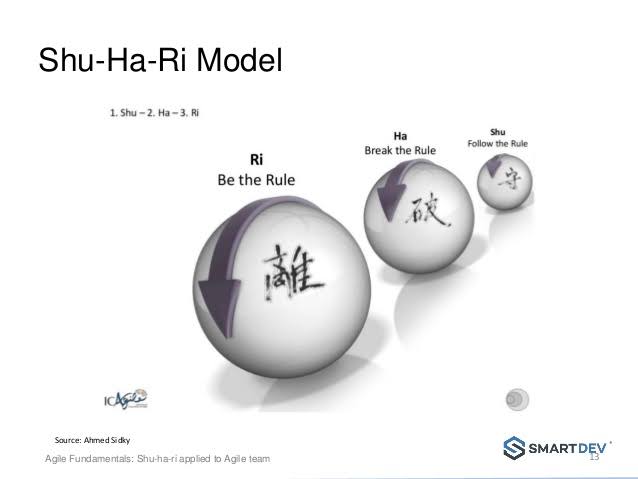 The idea is that a person passes through three stages of gaining knowledge:

The fundamental idea here is that when teaching a concept, you have to tailor the style of teaching to where the learner is in their understanding and that progression follows a common pattern. Early stages of learning focus on concrete steps to imitate, the focus then shifts to understanding principles and finally into self-directed innovation.

There are other expressions of this style of learning. A more nuanced approach is the Dreyfus model. I rather like Clark Terry’s formulation of this model: Imitate, Assimilate, Innovate.

Let me give you an example.  Let’s imagine, I am new in the city.  I don’t know anything I don’t know anyone except my friend Raju.  So I called him up and I ask “Raju how do I get from my home to the Office ?”.  He says “that’s easy, dude there’s five different ways to get from your apartment to the office”  and he tells me all five . Did that help me or confuse me?

What I need is specific direction to follow  so that I can reach office.  Now I’m going to put on a GPS on and will follow it. I’m following precisely without modification that’s what is called SHU.

Then we move from SHU to HA. HA says this so I understand that there are five different ways to get from start to end right and I understand when to shift between these techniques based o situations or the scenarios.

Imagine, to start with Agile Adoption, I’m going to say, you need to two week iterations , you need to do user stories like this , etc, etc . But here’s the problem people get stuck in SHU . They learn one way of doing things and they stop there, get stuck in the SHU box . That becomes the world of agile for them.

If a specific practice aren’t working, let’s invent something new that would works , creating new kind of practices. That’s where people need to get to . That’s where organizations need to get to. Create practices and new ways of working based on constraints that pop up at different points in time.

New practices should be evolved over time. What works for you does not necessarily also works for another team. Each team has to be on learning path and have build agility which will be unique for them.

Finally, assume you are in a rush and don’t have time. Will you even start to experiment with another route or be stuck in traffic  thinking known route is better than risking in unknown route. For this you need to be seeking new techniques, new learnings, experimenting continuously.  So the interesting part is agility manifests during constraints. New route may not necessarily reduce the cycle time, but when agility manifests it is the best possible in a given scenario.